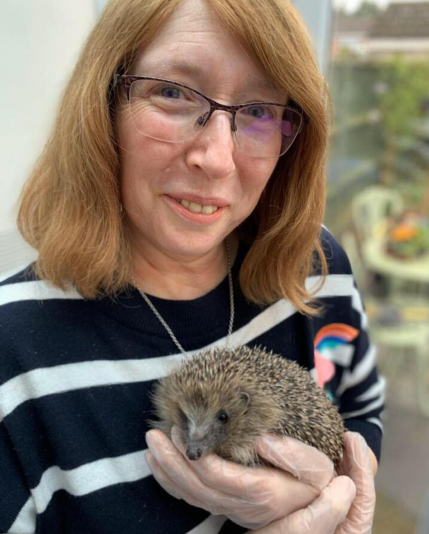 We were contacted by BBC Radio Leicester’s Namrata Varia who told us about an interview they had just aired about a remarkable woman called Sue Bonnington.  Sue runs a hedgehog hospital from her home in Glen Parva, Leicestershire. The former cancer nurse was diagnosed with terminal cancer while training to run the London Marathon in 2017. Sue became fascinated with hedgehogs when she started volunteering at the Leicestershire Wildlife Hospital, and now she currently rescues around 45 hedgehogs a year. She also works hard to raise awareness in her local community by encouraging people to put holes in their fences to create a hedgehog network.

Sue was in desperate need of a new larger TLC-40 Advance incubator for the hedgehogs, as she currently only has a Brinsea TLC-30 which is mostly used for transporting poorly hedgehogs. Sue doesn’t receive any funding; she funds everything herself. She was interviewed by Ben Jackson from BBC Radio Leicester who visited her at her home and he was clearly moved by her story, as were many listeners. One listener set up a Just Giving page to raise money for Sue’s much-needed incubator and there was a flurry of donations!

In a wonderful gesture, Leicestershire Fire & Rescue charitable fundraising team said they will buy the incubator that Sue needs for the hedgehogs. The target was to raise £500 but the wonderful people of Leicester and the UK have so far raised £3,166.00 for Sue! These donations will go towards the upkeep of the hedgehogs, such as medical expenses, food and bedding – allowing Sue to carry on her much-needed hedgehog care.

Sue’s TLC-40 Advance has just been ordered, and we look forward to receiving photos of the hedgehogs and hoglets that Sue is caring for making a recovery in their new intensive care unit..

Sue said, ‘When I get very sick hedgehogs in at the moment I have to get up several times during the night to top up the hot water bottles that are keeping them warm. Getting the larger Brinsea TLC-40 incubator will be a massive help in being able to take in the critically sick hedgehogs that need a constant temperature to help them recover, it will also mean I don’t have to get up in the night to check on them. I am so very grateful for all the generous donations and the kindness shown to me and the hedgehogs, it’s truly overwhelming.’

Brinsea incubators are the best, and their customer service is exceptional. I would recommend them to anyone. It's one thing to have an excellent product but makes all the difference to have the support...

Read full testimonial
Dear Sir This letter is not a complaint – it is the opposite. Having bought an Octagon 20 Advanced from Countrywide in Bourton on the Water on 8th August, I phoned you to ask if the dividers and instruction...

Read full testimonial
I buy Brinsea because they are a reliable and trustworthy brand. I know what ever I buy, I will get the best results. Price comparision to other leading brands is second to none for the quality of the...