‘I first saw a picture on social media of a leucistic owl, a beautiful pure white barn owl and was really taken with how beautiful it was. I set about tracking one down to add to my collection of birds. I have a common barn owl and several pure white doves which I take to wedding venues. I also visit schools, care homes, Brownies and do charity work. I saw an advert on the internet for a pair that bred the white barn owl. I contacted the gentleman who sold me my common barn owl, and he said there is no such thing as a white barn owl it will be an albino! He suggested I buy the pair and he would mentor me as he is local to where I live. Although I didn’t set out to become a breeder of owls, I took the plunge and before I knew it the beautiful pair arrived by courier five years ago. Suddenly I had become a potential breeder for this magnificent species.

Albino birds and leucistic birds are different. Albinism is a condition in which there is an absence of melanin. Melanin is what is present in the skin and it’s what gives skin, feathers, hair and eyes their colour. Leucism is only a partial loss of pigmentation, this can make the animal have white or patchily coloured skin, hair, or feathers.  I was informed that breeding a leucistic bird meant there is a high mortality rate, which I discovered for myself.

Although I prefer owlets to spend the first couple of weeks with their parents this turned out not to be viable in my first hatch as one parent began to eat the chicks. One reason could have been that they think that the chicks are not normal and won’t survive. Another reason seems to be that the male can get jealous of the female paying attention to what’s under her brooding patch leaving him feeling neglected! A breeder advised me at this stage to remove the eggs and to try hatching hatch them myself. I learned fast and tried this method using a heat pad. What I had learned about breeding doves helped me, but breeding owls is certainly a different ball game! I had a few hiccups and heartbreak in this learning process.’ 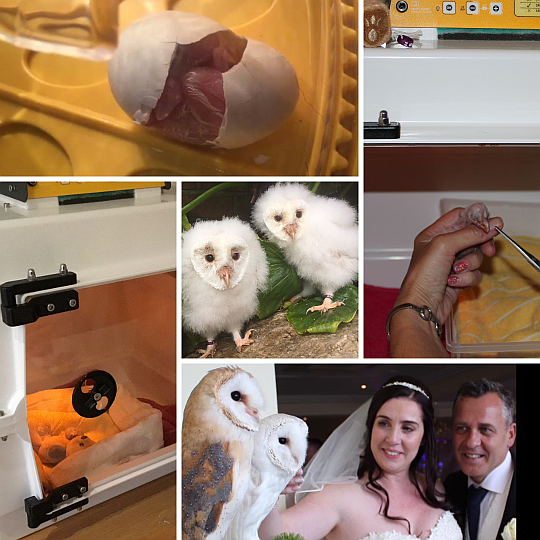 ‘I invested in a Brinsea Maxi II Maxi II EX incubator and a Brinsea TLC-40 Advance brooder and in doing so had far more success than in the previous four years of breeding. The Brinsea incubator has a great design which allows you to view the eggs hatching meaning as owlets hatch out every two days, I can act on their needs individually. The Brinsea TLC brooder plays a major part in my success, this is due to the design with its antibacterial plastic which helps to keep the hatchlings safe and hygienic. I use the Brinsea incubation disinfectant to clean the TLC during and after use and put a teeny amount as stated in the water. The settings for both equipment which is set for barn owl temperatures means I can rest assured that there will be steady temperatures throughout night and day which gives me peace of mind in rearing successful clutches.

I would not be without these pieces of equipment as I know my success is down to using these Brinsea models.

Dear Carolyn Enclosed is the Polyhatch turning arm that you have very kindly offered to swap with one to suit my ancient Polyhatch incubator. Nowadays, with customer care seemingly a distant memory, it...

Read full testimonial
Very helpful company. I have a 2005 incubator made by them that has been in more or less constant use since I bought it new. I dropped it yesterday and broke the fan, called them up and it being so old...

Read full testimonial
I love your products, best incubators out there. Simple to use, thank you  Brinsea!