What to do if the power goes off - firstly, don't panic!

How Temperature Affects Egg Incubation Or WHAT IF THE POWER GOES OFF?

This is a question frequently asked by anxious bird breeders; usually after an unexpected power failure and the question is ‘what damage is likely to have been done?’ Occasionally the power shutdown can be predicted and the concern is to keep damage to a minimum.

With the emergency situation in mind as well as the more subtle question about daily cooling of eggs during incubation, we have attempted to set out some of the more fundamental research information together with our own experiences and suggestions.

Long term temperature effects
A review by H. Lundy of research carried out by a number of scientists over many years identified five temperature zones characterised by major affects on the developing embryo. These zones are not clear cut. There is some overlapping and the time for which the embryo is exposed and the age of the embryo blur the limits. 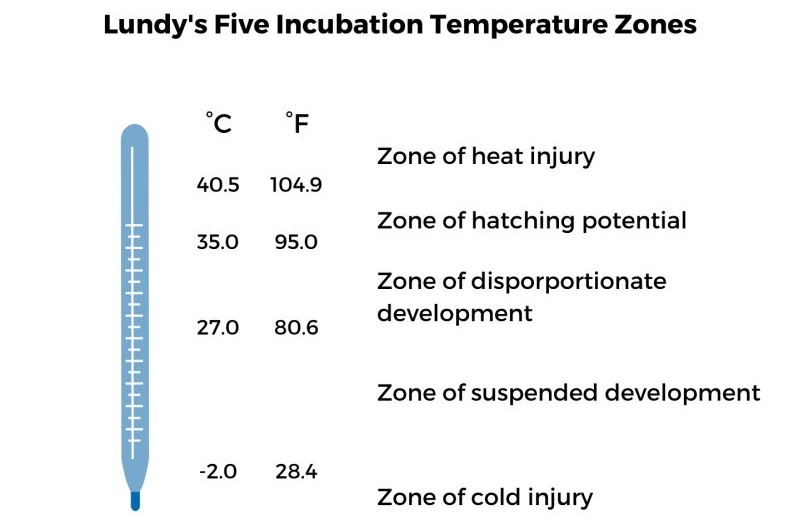 In common with most scientific work on incubation, this data assumes a fan assisted with virtually no temperature differences within the incubator and was based on chicken eggs.

Zone of heat injury (above 40.5°C/104.9°F)
At continuous temperatures above 40.5°C (104.9°F) no embryos would be expected to hatch. However the effect of short periods of high temperature are not necessarily lethal. Embryos up to 6 days are particularly susceptible, older embryos are more tolerant. For example, embryos up to 5 days may well be killed by a few hours exposure to 41°C (105.8°F) but approaching hatching time they may survive temperatures as high as 43.5°C (110°F) for several hours.

Zone of hatching potential (35 – 40.5°C/104.9 – 84.5°F)
Within a range of 35 to 40.5°C (84.5 – 104.9°F) there is the possibility of eggs hatching. The optimum (for hens) is 37.5 °C (99.5°F), above this temperature as well as a reduced hatch there will be an increase in the number of crippled and deformed chicks. Above 40.5 °C (104.9°F) no embryos will survive. Continuous temperatures within this range but below optimum will slow development and increase mortalities. Again it is early embryos that are more susceptible to continuous slightly low temperatures than older embryos. From 16 days on it may be beneficial to lower the incubation temperature by up to 2°C (3.6°F). The effects of short term reduction in temperature are different and are discussed later.

Zone of disproportionate development (27 – 35°C/80.6 – 95°F)
Eggs kept above 27°C (80.6°F) will start to develop. However the development will be disproportionate with some parts of the embryo developing faster than others and some organs may not develop at all. Below 35°C (95°F) no embryo is likely to survive to hatch. Typically the heart is enlarged and the head development more advanced than the trunk and limbs.
The temperature at the lower end of this range is sometimes referred to as ‘Physiological zero’ – the threshold temperature for embryonic development. Unfortunately different organs appear to have different thresholds resulting in an embryo that cannot survive.

Zone of cold injury ( -2°C/28.4°F)
Below this threshold ice crystals will start to form in the egg and permanently damage may be done to internal structures meaning the egg cannot hatch. Eggs may lie for some considerable time in temperatures close to freezing without suffering damage.

The analysis above gives us a fair idea of what may be happening to embryos kept continuously or for long periods within these temperature bands. Of course continuous incubation at any temperature other than near optimum is of little practical interest because it will not result in live birds but this information does give a better understanding of what may happen if eggs should be accidentally overheated or chilled.

Surprisingly there is evidence that, during the early phase of incubation, chilling of eggs to below ‘physiological zero’ (say 25°C/77°F) does less harm than chilling to temperatures above that level. Embryos up to 7 days old may well survive cooling to near freezing for 24 hours or more without damage. The cooling delays hatching but not by as much as the period of chilling – so there appears to be some degree of compensation. The older the embryo, the more likely it is to die as a result of chilling to below 27°C/80.6°F but the effect on surviving embryos is not detrimental. Other experiments have concentrated on cooling eggs less severely to temperatures within the zone of ‘disproportionate development’. In virtually all such experiments, increases in hatchability have been noted. There is some doubt as to whether the effect is due to changes in humidity, CO2 level or to chilling alone

Remember that incubator thermometer readings will not be the same as embryo temperatures when cooling or heating occurs. The eggs will lag behind the air temperature. For example, cooling hens eggs by taking them out of the incubator into a room at 20°C/68°F for 30-40 minutes is likely to cool the internal egg temperature by only 3 – 5°C (7 – 10°F). Bigger or smaller eggs will react quicker or slower accordingly.

There isn’t much data on the effects of cooling eggs of other species. Duck eggs and to an even greater extent, goose eggs, are said to benefit from periodic cooling. Our own experience seems to confirm this and we know of instances where the eggs of both duck and domestic geese have been subjected to severe cooling for several hours without harm.

There is an obvious link to the natural incubation process where most species of bird leave the nest for short periods to feed leaving the incubating eggs to cool without apparent problems. It is quite possible that the resulting cooling and re-heating provides a stimulus to the embryo which actually encourages growth. If the effect is more pronounced in ducks and geese it may be because the requirement has, to some extent, been bred out of hens by years of artificial incubation. It would follow that totally wild species may be even more susceptible to a cooling stimulus. Certainly there is no evidence to suggest that short term cooling is likely to be harmful.

Thank you for your quick response and for the very clear diagram which even an old guy like me can follow. Thank you for a great product which coupled with the incubator have given two old fools a couple...

Read full testimonial
I love your products, best incubators out there. Simple to use, thank you  Brinsea!

Read full testimonial
Can I bring to your notice the excellent advice, service and subsequent information and support. I have recently purchased two of your products, an Ovation Ex and an Eco Mini. These were purchased from...