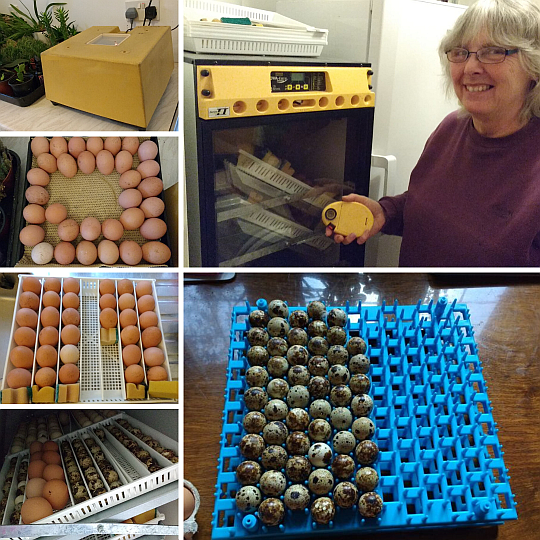 ‘I started out with poultry about 47 years ago, like most people, it started with 3 hybrid layers in the garden, and like everyone else I had one called Henrietta. At a county show I came across LF Chamois Polands. That was me hooked. With my interest sparked we started visiting rare breed collections and buying one or two more birds. After a few more years I was given an old round polystyrene incubator, it didn’t work well, probably due to age and an amateur user…. I did get a few chicks and runner ducks out, I had to keep them as they were the first… it gave up ghost the next year.

Our local farm supplies started selling new, funny looking, yellowish box incubators, you couldn’t miss the colour in a dull collection of poultry and farm equipment of the time. The sales person said they were simple and cheap to run (like me) so one went in my car – it was a Brinsea Hatchmaker. It was a manual turn, still air machine. I put the eggs in rows and I even talked to them, to me they are personalities even at that stage! I turned them at 12-hour intervals, probably the minimum turns. The runner duck eggs I tried it with all came out but one, and in those days, ducklings sold well at Henley market which was not too far from us. The incubator paid for itself with that first hatch, so I picked up another one on the next farm supplies trip. After the third purchase they stopped selling them for some reason, but probably just as well! I found having three incubators was good if using them for hen eggs, you could set one a week, then wash it and refill it in no time, they are easy to wash and use which seems to be a Brinsea thing. I still use the Hatchmakers for small numbers of eggs early and late in season and as hatchers to avoid cleaning the big incubator.

I continued to add new breeds of chickens to my collection, and also added more ducks. It takes four weeks to hatch ducks, so I needed another incubator. Although turning three incubators by hand was effective, I was also short on time. I discovered the Brinsea Polyhatch, which had automatic turning. It was more expensive, but these incubators pay for themselves, so I splashed out. It worked well, as I had expected, the only thing I could fault it on was the side to side rolling of the eggs could result in them working their way to one end of the rows and not turning so well. I found it best to realign the eggs and move the egg position in the incubator every week to get the most even hatch, but over all I had an excellent hatch rate and it was easy to use. When I had one empty incubator, I used to hatch in the Hatchmakers and incubate in the Polyhatch, the Polyhatch turning bar rows make it easy to keep track of different ages and types of eggs; I write on eggs in pencil, not pen. I found that if you switch off the turning motor, take out the bars and hand turn you can get half as many eggs again in a Polyhatch and you can really go to town! Some people swear the Hatchmaker is the best incubator for ducks.

The Brinsea Octagon 20 took many of the good points of these early incubators, it’s easy to clean as the base of incubator and egg basket can just be washed in the sink. Don’t put it in the dishwasher as someone’s mum did, it’s not designed for that heat! Even though Brinsea no longer make these incubators, finding spare parts is not problem. I found as time went on, I had no more work surfaces left, there were yellow Brinsea incubators all over the place!! I decided to get modern. A Brinsea OvaEasy 190 came on the market, to me it was a new-fangled thing but I had a lot of rare breeds then, and many of my favourite Polands as well, so I decided to give it a try. It was just the right size to fit on the worktop in the utility room so it was easy to get the trays in and out, and to keep an eye on, and to clean, although dumping it in the sink is out of the question! I found it easy to put mixed batches of eggs in as you have really good vision, and you can divide the trays more or less as you wish, quail can be a bit fiddly though. This machine tilts the trays rather than rolling them so they don’t need any adjustments and having the fans means you don’t get any real difference in temperature or humidity anywhere so it gives a very even hatch. I did find it best to hatch in the Hatchmakers to keep the dust from flying everywhere with the fans, and to keep cleaning easy, in fact by hatching separately I didn’t even need to clean main incubator all season. I do put a thick towel on the base of the cabinet incubators as I have been known to miss an egg in mixed batches, and a soft landing is useful. I’ve never had a chick come to harm this way but it’s not to be recommended.

I liked the OvaEasy 190 so much I got a new OvaEasy380. I really like this machine, although it is harder to reach the back though. My 380 sits on a two-drawer metal filing cabinet as it is very heavy when full, and you would have a job to reach back trays if it was too high or low. Good record keeping is essential with so many eggs, but it hatches everything whether rammed full or has only one tray. I set the temperature to suit the most delicate eggs and find all do well in mixed bunches, hatching to the day. One thing I like is eggs in these are placed bum upwards – so to candle I get the tray out, get the Brinsea OvaView yellow candler in one hand, a marker in other, turn the big light out, and using the candler upside down I just candle each egg sitting in the tray, place a dob on any clears with the marker. It’s done in seconds, then I put light on, take out marked eggs, replace with new dated eggs if I can get away with it, and replace the tray.

Now I have retired and nearly given up poultry, I actually sold some of the incubators, however I just kept a few in case I need them – you never know! I couldn’t be parted from my 380 because it is an old friend and what else would I use the space for? My friends with eggs are finding the 380 very useful, resulting in me having to fill the gaps with the few eggs I still get from my reduced collection of birds; well I don’t have to, but wasted space is not good!

I have not tried the newest Brinsea Ovation incubators yet, mainly because I got on so well with the incubators I had and they never wear out. You can always buy spares from Brinsea, a good thing in our save the planet world.’

I spoke to someone about 3 weeks ago about my incubator not working properly, and discovered I'd put my fan on the wrong way around after cleaning! I'd just like to say thank you so much for your help...

Read full testimonial
Just a quick email to thank all concerned for the prompt dispatch of my recent order, new motorised end for Octagon 40 arrived today, only two days after ordering. Very impressed. Thank you.

Read full testimonial
Your efficient customer service and after sales care combined with the three year warranty is very reassuring and is a big factor in continuing to choose Brinsea products.