The Wildlife Haven Rescue and Rehabilitation Centre (WHRC) is a wildlife rescue charity based in North Yorkshire. The charity was founded in 2008, however the founders, Lauren and Krista, began their work in the field of wildlife rescue in 1999. WHRC takes in ill, injured and orphaned wild animals from across the whole of the north of England; including, North Yorkshire, West Yorkshire, South Yorkshire, the East Riding of Yorkshire, County Durham, and Teesside.

‘Initially starting out with just a few hundred calls per year, WHRC now receives up to 3000 calls, emails, and text messages from members of the public, veterinary practices, RSPCA officers, and others. We take between 1200 – 1600 wild animals a year, but every year the number of animals coming in to care goes up. Our aim is to release every animal brought in to us, back into the wild.

We use the Brinsea TLC-40, TLC-50, and TLC-4 units every day at WHRC. Their use is dependent on the season. For example, in the early spring we have many orphaned mammals coming into care, including fox cubs, and baby rabbits. Late spring, early summer sees nest after nest of young garden birds arriving at the door. Mid-summer we take in large numbers of aerial feeding birds and young hedgehogs. Once the end of summer, beginning of autumn comes around, we begin to see dozens of young hedgehogs, which continues into the winter. 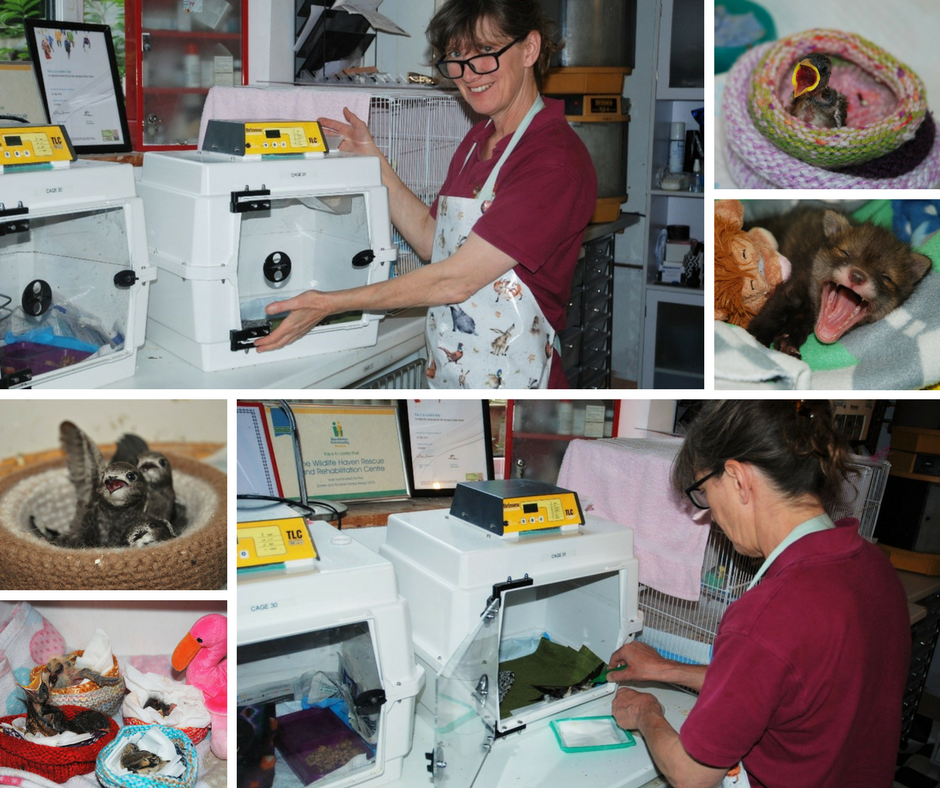 The Wildlife Haven Rescue and Rehabilitation Centre uses Brinsea TLC incubators to provide care for a wide variety of animals.

The intensive care units are an absolute life saver for young, and/or ill animals, as we are able to set a precise, stable temperature and regulate humidity levels. The TLC-4 and TLC-40 are used to house the smaller birds, and very young mammals, but the TLC-50 can house much larger animals, such as birds of prey, badger cubs, and young foxes.

The best feature of the TLC brooders is the precise temperature control, with a sensitive alarm system if the temperature changes even slightly higher, or lower than set. The humidity regulation is also helpful to keep careful control of the environment; which is particularly important for hatchling birds. The new square design, with a removable door, is much easier to keep clean than the old circular model.

If you would like to support our work, please consider giving us a donation, either through the donate button on Facebook, or by visiting our website.’

Absolutely fantastic customer service, any issue big or small they have resolved as quickly as possible, no questions and honour their warranty beyond expectations.

Read full testimonial
I like to breed the best and to get the best results we use the best equipment. I have used Brinsea for the last 10 years and started with the Octagon 10 then had octagon 20 then 40 we now have 2 x 380's!...

Read full testimonial
Your efficient customer service and after sales care combined with the three year warranty is very reassuring and is a big factor in continuing to choose Brinsea products.